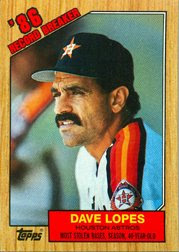 Brace yourself for a tangent here.

OK, first Dave Lopes? Not Davey? OK, Topps. But overall this is a great shot of Lopes...on the bench. Which actually makes sense considering he only had 255 ABs in the year he stole 25 bases. Now, that doesn't seem like a lot of ABs for a guy with that many swipes, but then I found the '70s As. I'm too young to have watched these teams, so someone will have to fill me in if they have any firsthand knowledge of how this team played, but WOW. In 1974, Herb Washington stole 29 bases and had ZERO ABs. Zero! The guy played in 92 games...and he never played the field!!! So he pinch ran in all those 92 games. And what's worse, he was caught stealing 16 times! That's a terrible %.

What's more, this was not an isolated year. Check out the 1975 team, 1976, etc. And it wasn't just one wacky manager's philosophy; they did this year after year. Am I the only one who finds this interesting?
Posted by bloggerDK at 5:07 AM