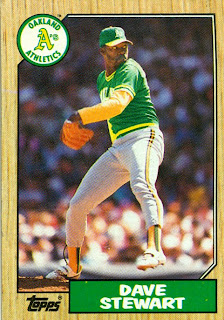 Ugh. It would be hard to find a baseball player I disliked in the late '80s more than Dave Stewart. Mostly because he was such a postseason force for Oakland. But man was he a man of two careers. He was a below average pitcher until he moved to the Bay, when he promptly won 20+ games four straight seasons, all after his 30th birthday. I wonder if anyone's ever done that before.

The photo does a good job of capturing that intimidating stare Stewart used on the mound. He looks downright scary in this photo. Although it would be hard to be intimidated by a guy wearing all those goofy stripes. In fact, let's count them.

3 at the collar
3 on the left sleeve
3 at the waist
3 on the left leg
4 counting each side of each stirrup (yes, i consider those stripes)