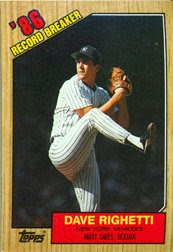 Ah, I see why Topps decided to call Davey Lopes "Dave." They didn't want Righetti to be the only record-breaking Dave.

In '86, Righetti set the single-season saves record of 46. That number has been exceeded several times since then, and in '08 K-Rod set the new record with 62. So I'll use this as an opportunity to complain about how overrated K-Rod is. Last year he saved 62 games...in only 68 and a third innings. That's a pretty amazing feat, and you guessed it, he had exactly zero saves of more than one inning. And the first time all year he was left out there to try to close one out for more than an inning, he got the loss in game 5 of the ALDS against the Sox. Yes, he had a pretty good ERA for a closer of 2.24, but he also has had a WHIP that has climbed the last three years, finishing at 1.288 last year. That is NOT good for a guy who's supposed to be an elite closer.

Let's take a look at the WHIPs of the other AL saves leaders in '08:

So the only top save guy with a worse WHIP was George Sherrill, who was only a closer out of necessity and finished the season with a 4.73 ERA. The Mets should be a little worried.
Posted by bloggerDK at 5:22 AM