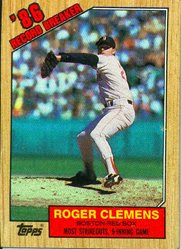 And we're off! The first card of the 1987 Topps set is a Roger Clemens Record Breaker commemorating the game when the Rocket K'd 20 Mariners. It's funny seeing such a svelt Clemens after we've had the fat 'roided Roger shoved down our throats the last couple years. Growing up a Sox fan, I can't imagine any athlete going from loved to hated as much as this guy.

Overall, I like the Record Breaker cards, but you'll notice that on some of them, "Record Breaker" is red and others it's yellow. Not sure why Topps did that. Luckily, the record breakers don't diverge too much from the regular design, which is the now legendary wood backgrounds. Doesn't get more classic than that, and as far as I'm concerned, it hasn't been duplicated. More on that later.
Posted by bloggerDK at 9:18 PM