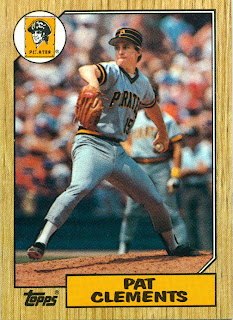 Aside from the fact that he looks like he's 12 in this photo, I don't have a lot to say about Pat Clements or his card. Decent shot of a Rawlings glove and that goofy Pirates that looks like something you might have seen John C. Reilly wear in Gangs of New York.

Pat was was a reliever for his somewhat brief major league tenure but did make two career starts. One came October 2, 1988, when Pat threw 6 innings o 3-run ball against a Tigers team who finished 1 game out of first in the AL East. He got a no-decision as a guy we just looked at, Dave Righetti, picked up the loss. A year later, this time pitching for San Diego, he gave up 5 runs in 3 innings to St. Louis. No wonder he didn't start many games.
Posted by bloggerDK at 5:52 PM