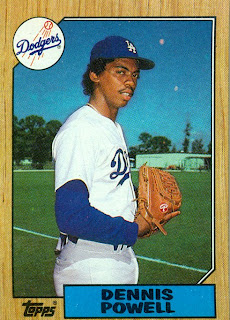 This is a weird card. First, Dennis looks like he knows some secret that he's afraid we might figure out. And I'm guessing it's the identity of the guy behind him. Check out that stirrupped foot behind his back. If you look quickly, it almost makes it look like Powell is wearing one of those wireless mic battery pack things that talk show guests wear. That's also a strange edifice in the background. It almost looks like a travel trailer that's halfway underground. Maybe someone more knowledgeable about Dodgertown has an idea what that is.

Aside from that,w e have a decent look at the Dodgers logo on the cap, a nice shot of the Dodger "D" and good look at a new Rawlings glove.

I don't have any first-hand recollection of Powell, but looking at his stats, he was pretty crappy. He pitched 339 innings over an 8-year major league career for LA, Seattle and Milwaukee (as a reliever and spot starter) and finished with an ERA+ of 80. Blech.

However, he does share a pretty meaningless record. He accumulated 3 hits in his career, all doubles. That ties him for the MLB record for career hits totaling nothing but doubles with Earl Hersh and Verdo Elmore. Good for him.
Posted by bloggerDK at 8:28 AM 2 comments: 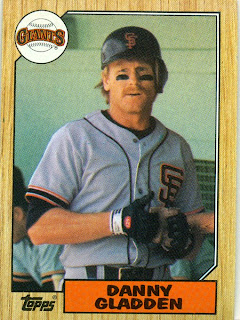 I never think of Gladden as a "Danny," always a "Dan." I also think of him as a Twin and looking like this. Whoever created that had a pretty funny idea. (It's supposed to be George Brett sprinting out of the dugout during the pine tar game.)

It's a pretty boring card so I'll get right to his career. After getting out to a blazing start as a rookie, hitting .351 over 342 ABs, Gladden settled into his role as a light-hitting, defensive-minded, stolen base threat. He never did much with the bat, but was a big part of the Twins' World Series wins in '87 and '91, scoring the winning run in game 7 against the Braves in '91.

Checking out his Wikipedia page, there's a good piece of trivia. Gladden was one of 7 Twins on the team for both World Series teams. Who can name the other 6? Without looking of course.
Posted by bloggerDK at 4:48 AM 5 comments: 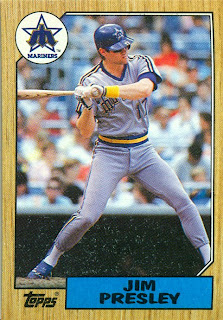 What in the world is going on here. Presley looks as if he's about to check his swing and/or jackknife out of the way of an inside pitch. But what is all that stuff getting kicked up at the bottom of the photo? It doesn't look like it can be the ball hitting the ground and stirring up dirt. Nor does it look like Presley's feet can have been the cause. So unless this was taken in Cleveland during the '08 ALDS, I have no explanation for it.

Primarily a third baseman, Jim Presley showed some good pop in his short career. He spent the bulk of his time for some awful Seattle teams (as you can see here) and was out of the league before he was 30. As I mentioned, he did have power (consecutive seasons of 28 and 27 homers) but he had hardly any plat discipline. As a full timer, he never amassed more than 44 walks or fewer than 100 Ks. I flipped down his B-R page to see if Russell Branyan appeared in his most similar batters list, but nope. Regardless, that's the guy to whom I'd liken him offensive ability.
Posted by bloggerDK at 4:29 PM 2 comments: 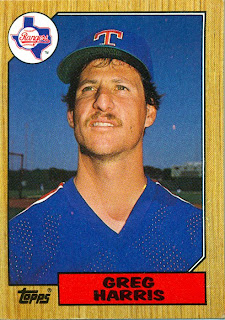 What is Greg looking at here? I hope it's a skywriting ad for mustache trimmers. That is a terrible, terrible 'stache, and a pretty boring photo to boot. Hey, I just used the expression, "to boot."

Greg Harris (not Greg W. Harris, mind you--hey, I just used the expression, "mind you") was a very useful reliever throughout his 15-year major league career. He spent most of the time coming out of the pen, but did make nearly 100 starts. I remember Greg best as the reliever for the Red Sox who led the league in appearances in 1993 (throwing 112 innings) and had that goofy ambidextrous glove. It seemed like we would see him in every game that year, and thanks to a team playing .500 ball, we almost did.

Throughout the latter part of his career, Greg repeatedly made it known that he wanted to pitch with both arms, alternating as dictated by the opposing hitter. He finally got a chance with the Expos in '95, and, according to Wikipedia:

"In the ninth inning, Harris retired Reggie Sanders pitching right-handed, then switched to his left hand for the next two hitters, Hal Morris and Ed Taubensee, who both batted lefty. Harris walked Morris but got Taubensee to ground out. He then went back to his right hand to retire Bret Boone to end the inning."
Posted by bloggerDK at 5:59 PM 3 comments: 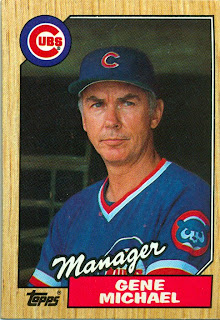 A surly looking manager card! Woo-hoo! I actually really dig this card for some reason. I love the classic Cubbies logo on the sleeve and the "C" on the cap right next to the printed logo in the upper left. And Gene's looks is just what I like to see on a manager. One thing that bothers me is the red in the name plate is really clashy with the red in Gene's uni. Other than that, nice manager card.

Yanks and Cubs fans probably have better thoughts on this guy, but he certainly didn't have much success as a manager. Where he DID succeed, however, was as a GM for the Bombers in the late '80s and early '90s. Michael is a huge reason for New York's dominance at the end of the 20th century, putting a lot more emphasis on homegrown talent, including Jeter, Posada, Pettitte and Mariano Rivera. You don't hear Gene Michael's name mentioned much as one the architects of those great Yankee teams (or at least I don't), but you should. He really reversed the the strategy they had in the '80s of bringing in washed up, high-priced "talent" to fill seats instead of win games. Personally, I wouldn't mind if they returned to that strategy so I could keep making fun of them, but that's just me.
Posted by bloggerDK at 6:42 AM 2 comments: 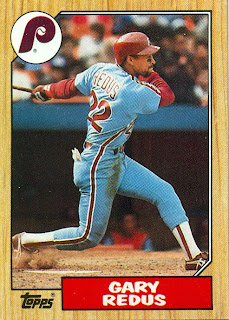 A lot of dirt on the uni in this photo, which is perfectly appropriate for Redus. You also get a nice look at the name on the back of his jersey, while still seeing his face. Very cool. And as a bonus we get a nice shot of a catcher between Gary's legs. John Russell maybe? It doesn't look like Darren Daulton to me. 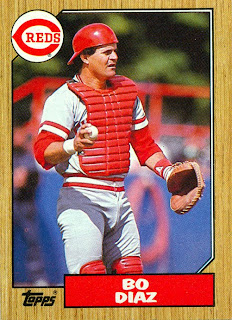 This has got to be a spring training shot here. It looks like the line for a roller coaster in the background. Bo also looks a little pensive. I'm going to guess he's actually about to toss the ball back into his glove. Other than that, it's an OK photo. Lots of red, white and blue.

Diaz was not much of a hitter, but as so many catchers do, he built himself a pretty long career. His best season came in '82 when he hit .288 with 18 homers and 85 RBI in 525 ABs. Over his career as an offensive player, his big problem was selectivity. Over his 3537 PAs, he struck out 429 times and only walked 198.

And then in 1990, Diaz was killed while adjusting a satellite dish on his home. Pretty sad.
Posted by bloggerDK at 6:31 PM 1 comment: 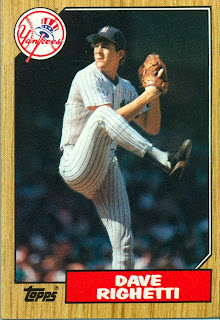 Not much to say about this card. We see Righetti's high leg kick here, which is kinda cool, but I'm partial to the pitcher shots where the guy is a little further into his delivery, showing some more physical intensity. Looks like Dave liked Pumas.

While pretty much everyone (myself included) remembers Righetti as a closer, he was actually a pretty solid starter for the Yanks at the beginning of his career. He made 15 starts in '81, edging such future stars as Shooty Babitt in the Rookie of the Year voting. In '83, he went 14-8, 3.44 with 169 Ks. Not too shabby. But the next year, NY converted Righetti into a closer and that's where he found a home. In '86 he set the single season save record with 46 and continued to be an effective, though not dominant closer into the early 90s.
Posted by bloggerDK at 6:17 PM No comments: 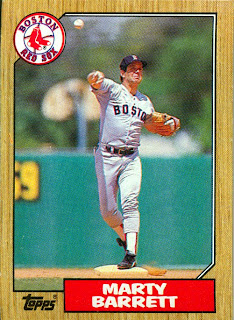 This is an odd photo. How many times to see a second baseman throwing from second with his foot actually on the bag? Usually he's straddling the bag, but in this shot, Barrett has his foot squarely on the base. He also has a goofy look on his face that makes him look about 80 years old. I wonder if the guys ever got together after a day game to play basketball on the court in the background.

There's not much to say about Barrett's career, so I go with a story instead. When I was in college, Sean McDonough, former TV voice of the Sox and national voice of many CBS sporting events, was speaking for a sports psychology class I was taking. I remember very little of the speech, but I do recall his answer to a student who asked, "Did you ever say anything on air you regretted?" McDonough couldn't think of anything he said on air (which I find hard to believe), but he told the story of the time when Marty Barrett was nearing the end of his tenure with the Sox. Dealings between the team and player got a little nasty and Barrett had Jody Reed breathing down his neck, so the Sox had all the leverage.

Anyway, around that time, McDonough was an up and coming announcer, as some people were comparing him to Bob Costas, who was becoming a star play by play guy for NBC. McDonough had made some critical comments about Barrett recently, so one day when Barrett ran into McDonough in the hallway, Barrett said, "I hear all these people talking about you being the next Costas. That's bullshit. You're about as close to Costas as I am to Ryne Sandberg."

To which McDonough replied, "At least you know how far you are from Ryne Sandberg."
Posted by bloggerDK at 12:13 PM 4 comments: