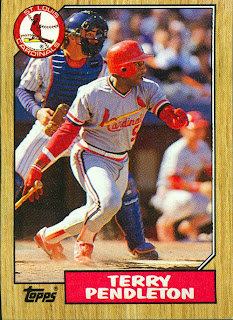 We all remember the MVP for Atlanta version of Pendleton, but here's a shot of the crappy .240 hitter with ZERO power version of TP. But this is actually a nice card. There's some nice symmetry between the catcher (gotta be Gary Carter, right?) and batter, and come to think of it, the fuzzy guy on deck, too. It's also another good example of the ridiculously stripey Cards' unis of the 80s. I hated those stupid striped waistbands, thank god they got rid of those.

I also just noticed something. In the Cards' jersey graphic/logo there are two cardinals. Which, when you think about it makes sense because the team is the St. Louis Cardinals (plural). Are there any other teams who used this strategy? The Red Sox have a secondary logo with two socks, but since the name is spelled with an "x" I don't think that counts. Anyone?
Posted by bloggerDK at 3:10 PM