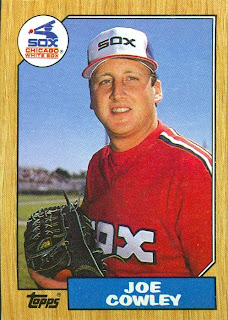 There is zero chance Joe finished his career without being called the Cowley Lion several times. To perpetuate the animal similarity, Joe looks like a deer in the headlights in this photo. I can't believe that of all the shots they snapped during this spring training session, THIS was the best one. At least we have a nice, new, black Mizuno glove to show for it. AND we have a great look at those retro White Sox unis. Any baseball fan knows the ChiSox have had some bad, bad, bad uniforms over the years, but I still think these look cool. You know, when they're not on a player who looks like he spent all night at Denny's.

I don't know much about Cowley, but I'm not sure why his career fell off a cliff. I'm going to assume injury, because after two consecutive solid seasons:

...Cowley pitched only 11 more innings in the big leagues. And those 11 innings did not go well (15.43 ERA). Those innings came over 4 starts in April of '87, so it's possible he just lost his effectiveness, was sent down and never came back.
Posted by bloggerDK at 10:17 AM