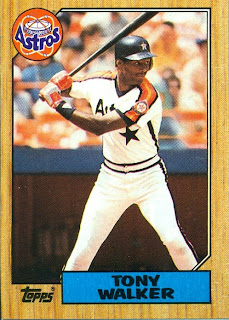 OK, let's start with the good: It's our first rookie card! And now the bad: It's Tony Walker.

Visually, the card is pretty decent. It's a nice look at the 'Stros uniforms of the 80s, marking the transitional period between the horrific 70s ones (see, it still has those stripes on the sleeves) and the modern day ones (note the predominantly blue and white design). There's not much to say about the photo, it's a pretty standard batter shot.

Now, about the player himself. Um, I got nuthin. Walker had a cup of coffee in '86 after spending 5 years in the minors. He had three minor league seasons with 40+ stolen bases, so the Houston brass must have thought they could make the kid into a leadoff hitter. Unfortunately, he hit .222 in 84 games in '86 an was summarily sent down to Tucson, never to return.

On an unrelated note, I played Babe Ruth League baseball (age 13-15) for the Astros and our manager was a crusty old Asian guy who owned a lamp store. He wasn't a very good manager, and it didn't help that he spit when he talked and had a thick accent that resulted in a lot of embarassing calls to the team, "Assholes, ova hee-uh!" It really sounded like that.
Posted by bloggerDK at 7:06 AM