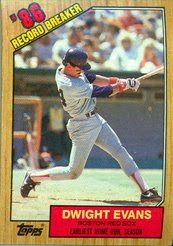 Dewey! If you remember Dwight Evans at all, you remember his stance. He came up under the hitting tutelage of Walk Hriniak, who somehow managed to ruin the swing of about half of the Sox hitters in the 80s. But it did mean he looked nutty in the batter's box, putting all of his weight on his back foot, drooping the bat way back and basically breaking every rule of hitting, aesthetic and otherwise. There was a kid on one of my little league teams who use to stand in the dugout and stretch a piece of chewed gum into a long strand, then hold it back like a bat and pretend to be Dewey. I wonder where that kid is now.

Anyway, Evans homered on the first pitch of the SEASON in 1986. This has always confused me, because why on earth was Dwight Evans leading off? According to B-R, he led off for the first 34 games of 1986 and a good portion of '85. That makes no sense to me. Whatever speed he had was gone by the mid 80s, he struck out a ton, and he had the kind of power you'd want in the middle of the order. I guess he did walk a lot, but still. Not your typical leadoff guy.
Posted by bloggerDK at 9:36 PM