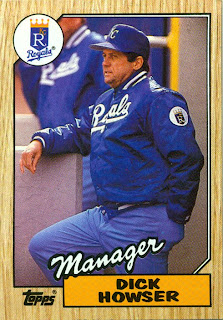 I remember thinking as a kid that Dick Howser was just a few letters away from having the coolest name in the history of sports. Dick Howitzer. Can you imagine that? There's no way a guy named Dick Howitzer wouldn't be successful. But even with a fairly forgettable name, Howser was an excellent manager. He won two World Series (with the Yanks in '78 and the Royals in '85) and had only one finish lower than second place at a time when there were only two divisions. And that was '86 when he didn't even finish the season due to a brain tumor. He came back for '87, but was unable to manage due to his condition, and ultimately died later that year.

It's a sad story, and an abrupt end to a very successful, albeit short managing career. Fittingly, the last game he ever managed was the '86 All Star Game.

It's difficult not to evaluate the card with all that in mind, but it's a pretty standard manager shot. One leg up on the dugout step, one hand in the back pocking, looking out to the diamond. We'll gloss over the fact that he looks a little too much like Dick Van Patten in this photo.
Posted by bloggerDK at 8:37 PM