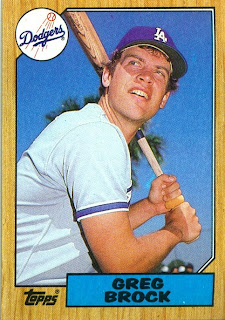 As much as he resembles the speedster, unfortunately, Greg has no relation to Lou. But this photo definitely could have been taken during Lou Brock's career. Everything about it looks very 70s.

The low angle with Greg looking off at...something.

The goofy, shaggy haircut with a few locks poking out the front.

The lack of any muscular definition.

And I just noticed something. Check out Greg's pinky on his left hand. What is up with that? I'm assuming it's a band-aid, but it almost looks like he's had a new finger grafted onto his hand.

As a player, Greg probably received more at bats than he should have, but he wasn't a terrible hitter. He had two seasons with 20+ homers (both for LA) and he ended up with an OPS+ of just above average (105). The problem was that he was a first baseman, and most teams don't have much tolerance for an average hitter at such an offensive position. Despite his mediocrity and the fact that he managed to contribute absolutely nothing to LA in two postseason series (just one hit in 21 ABs), Brock managed to stick around the big leagues for a solid 10 years. Good for him.
Posted by bloggerDK at 10:02 AM