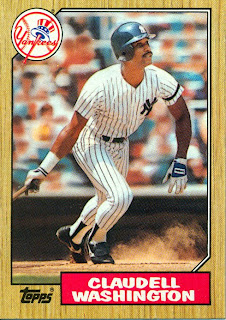 Aside from the fact that the background in this photo looks way too artificially blurry, this is a pretty great card. Claudell has clearly poked what looks like a lazy fly to right and is appropriately taking his time getting out of the box. But not before he kicked up a nice cloud of dirt, a very cool touch. (Thanks for not making this green, Topps!) Plus, it's a great full body shot, with Claudell squarely and completely in the frame.

I don't have many memories of Claudell Washington, but he's a lot older than I thought. I had assumed he came up around 1980, but 1975 was his first full season. Looking at his stats, he had a fairly productive, although somewhat middling career, which explains why he played the As, Rangers, ChiSox, Mets, Braves, Yankees, Angels and Yankees again. He would have been a lot more valuable if he could draw a walk once in awhile (.325 career OBP), but guess what? His career OPS+ was STILL better than Joe Carter (106-105).
Posted by bloggerDK at 5:35 PM