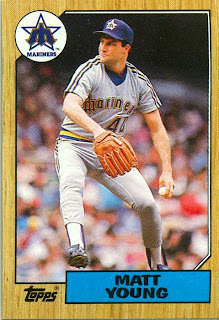 Yay! More stripes! At least we get a nice look at the Mariners old logo on Young's jersey and in the upper left corner. I actually liked that trident M. But what I don't like is that cheesy glove. Really? You're a starting pitcher for a Major League Baseball team and you're using a freakin' Velcro glove? OK, I know they were popular there for a little while, but come on, Matt.

As a rookie, Matt made the All Start team despite ending the season at 11-15. He did have a nice 3.27 ERA, which is exceptional for a rook. And I'm assuming he was the lone Seattle representative on the AL squad that year. But just for the hell of it, let's look at his splits to see how well he was doing when he was elected to the team, and how well he finished up the year.

That's a nice first half for any pitcher, let alone a rookie, despite the fact that Seattle's anemic offense refused to help the guy out. Seriously, their best offensive player that year was Pat Putnam, who hit .269 with 19 homers. If you have any recollection of Pat Putnam, you're a better man than me.

He trailed off a bit, but that's still an impressive half season for a rookie starter. Unfortunately, it was downhill from there. Young was an ineffective starter for the rest of his career. Ironically, his best season came when he returned to the Mariners after a brief sojourn on the west coast (OAK, LA), when he had a 3.51 ERA...and went 8-18. That's criminal.
Posted by bloggerDK at 12:47 PM