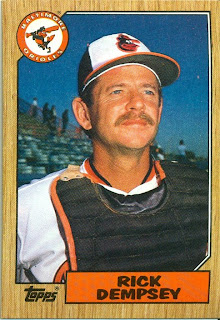 Hey, it's Gregg Zaun's uncle! I actually had no idea about that until I looked him up on B-R. Dempsey looks positively weather-beaten in this photo. He was only 36 when it was taken but he looks about 10 years older than that. The stylist should have straightened him up a bit, too. Look how askew his chest protector is.

For some reason I remember Dempsey as a much better player than he actually was. He racked up 400+ ABs in a season only once, which makes it all the more amazing that he stuck around the bigs for an incredible 24 seasons. Think about that for a second. 24 seasons for a catcher. Compare him to his nephew, Zaun who has had a very similar career, numbers-wise. Zaun is 37 years old and would have to play 10 MORE SEASONS to match Dempsey.

Volume metrics aside, Dempsey was a really lousy hitter. Over those 24 seasons he 140 more strikeouts than walks, only 96 homers, 471 RBI, and an OPS+ of 87. OK, so we've established he couldn't hit. Well guess what. HE WAS A WORLD SERIES MVP! That's right, in '83 Dempsey hit .385 over the 5 games with a whopping 1.390 OPS. Amazing. That might have been the best 5-game stretch of his career and he did it in the Series.
Posted by bloggerDK at 9:14 AM