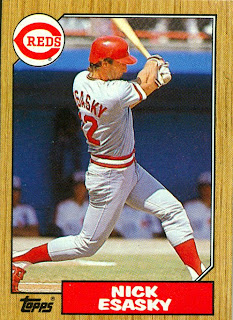 Finally, a player I actually liked! Esasky was a pretty productive player and seemed like a solid guy. He had his best season with the Red Sox in '89, hitting .277 with 30 homers and 108 RBI, but suffered from vertigo the next season, tragically ending his career.

Looking at the back, I may have to re-evaluate my assessment of his niceness, because, just like Jeff Sellers, he named his kid after himself. You're killing me, Nick!

Onto the card. Not bad. Decent photo, although I wish you could see a little more of his face. And the way his arms are shot, it makes it look like he has one big arm instead of two normal-sized ones. But overall, the action in the photo is just what you want on a great baseball card.
Posted by bloggerDK at 4:04 PM