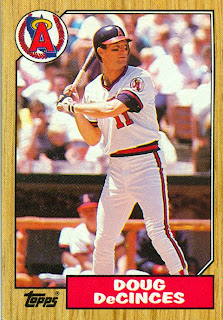 Another boring, stripey photo with a bat boy checking out DeCinces from behind. That bat boy looks like he's doing some crazy form of yoga. It almost appears as if his right knee is behind is back!

Doug was a pretty solid player for the O's, then the Halos in the '70s and '80s. He was one of those steady, not spectacular, kinda guys who was a fixture in the lineup and occasionally went on season-long tear (3rd in MVP voting in '82). Most notably, he was a part of two Angels teams whose seasons ended in heartbreaking fashion. In '82, the Angels won the AL West and took a 2-0 lead over the Brewers (who had that year's MVP, Robin Yount) in the ALCS. They then proceeded to drop games 3 and 4, blowing a 1-run lead in the 7th inning of game 5 thanks to a Cecil Cooper 2-RBI single. But you can't blame Dougie, he went 3-4 in that game.

Then we all know what happened in '86. The Angels had a 3-1 ALCS lead over the Red Sox and a 5-2 lead in the 5th game going into the 9th. Mike Witt gave up a 2-run shot to Don Baylor (who was on the '82 Angels team). Gary Lucas hit Rich Gedman. Then Donnie Moore (with one out away from an AL crown) gave up another 2-run homer to Dave Henderson, giving the Sox a 6-5 lead. Amazingly California tied it up in the 9th, but even more amazingly, Hendu again victimized Moore (WHO WAS STILL IN THE GAME) in the 11th inning with a Sac fly that ultimately gave the Sox the game 5 win. But you can't blame Dougie, he went 2-5. Boston would go on to win games 6 and 7 by a combined score of 18-5.
Posted by bloggerDK at 7:23 AM