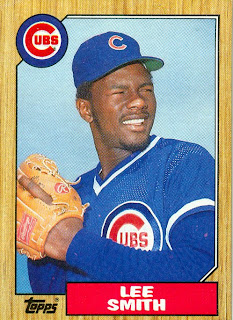 Why was Lee Smith always squinting? Seriously, he's squinting above, here, here, and here. Aside from that, this card is actually pretty nice. Lots of red, white and blue, a nice shot of two Cubs logos and a brand spankin' new Rawlings glove. I'll ignore the fact that the background suggests Smith is standing on a cloud. I think I chose that same background for my 4th grade school photo.

I remember that when Smith was traded to the Sox in '87 I saw him as an old, war-battered veteran who was nearing the end. I don't know why I thought that considering he went to the Sox when he was 30. Smith was one of the first of the modern day closers who you could count on to come in, throw peas and slam the door, while only pitching in close games. Smith was a great pitcher (one who I think should be in the HOF, as one of the first of his kind - Bruce Sutter is the other and he's in), but it shows you how little regard the voting community has for saves when the guy who is 3rd ALL TIME in a major statistical category isn't in the hall. For the record, I don't have much regard for saves either, but I think if Sutter is in, and Eck is in, Smith should be, too.
Posted by bloggerDK at 7:45 AM