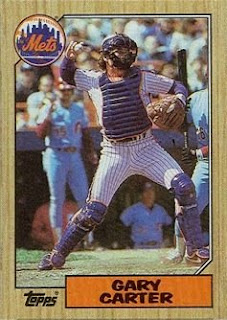 What looks like a nice action shot here is just Carter throwing down to second after some warmup pitches. Knowing that, it's not as cool a photo as it seems at first glance. But it's a decent look at a Hall of Famer who was seen as the premier offensive catcher in the National League during the late 70s and early-mid 80s.

Because of his position, Carter was a bit overrated as an hitter, but he certainly was a gamer. Twice in his career he caught over 150 games ('78 and '82) which is extremely rare in today's game, and even through history stands up as quite an achievement. In fact, Johnny Bench only did it once, Yogi never did it, Fisk did it twice, Bob Boone never did it, Campy never did it...the list goes on.
Posted by bloggerDK at 4:31 PM