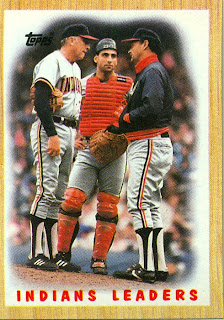 Here is the first of the individual team cards. We'll start with Cleveland, who had a pretty decent year in '86, finished at 84-78, which was a lot better than most of their seasons in the '80s. I never understood the whole white fog thing that's going on with the team cards. Why? To make them seem like some sort of wonderful dream? OK, I can buy that, but who the hell is dreaming of an Indians mound conference? At least we get a shot of HOFer Phil Niekro, who is clearly older than the pitching coach.

On the back of these cards Topps listed the team leaders for a few relevant categories. On this particular one, I learned that Joe Carter had 200 hits in 1986! I actually didn't believe it, so I looked it up, only to find it was true. I'm still in disbelief about that. Joe Carter was a tremendously overrated hitter who struck out a ton, never walked, and ended his career with a .259 batting average and OPS+ of 105. He built his reputation on a few big hits and some decent power numbers. But you have to hand it to the guy, he did have a good '86. .302 with 29 homers, 121 RBI and a 130 OPS+. I won't mention that aside from that one season, he never had one when he reached even 175 hits.
Posted by bloggerDK at 3:41 PM