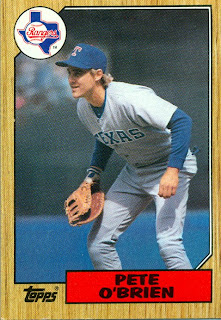 Funny, he doesn't LOOK like a guy who would leave depraved voicemails. Oh wait, that was PAT O'Brien. With that weird semi-smile on his face, Pete doesn't look quite as ready as the situation might require. He almost seems like he knows his photo is being taken. Hey at least we get a break from the stripes.

There have been three Pete O'Briens in major league history and this Pete was by far the most successful. He had a very consistent career, and was generally one of those .270, 15-20+ homer guys, numbers that seem paltry as we emerge from the steroid era, but he was a pretty well regarded player who was a regular first-baseman for Texas, Cleveland and Seattle.
Posted by bloggerDK at 7:32 PM