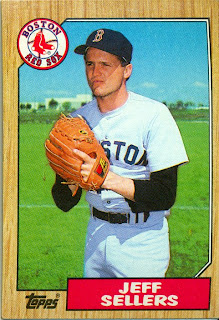 According to the back, "Jeff and his wife have a son, Jeffrey Doyle, Jr." Here's a new rule. If you suck, you're not allowed to name your kid after yourself. I suppose that would eliminate nearly all legacy names as suckitude is really a prerequisite for having the stones to name your child that way.

Sellers started a few games for the Sox over a few years but didn't do...well...anything. So let's concentrate on the photo. First, we have another brand new Mizuno glove and a background that suggests spring training. It's a pretty bland card, and it's not helped by the squinty, confused look on Sellers' face. Maybe he just couldn't see! Yeah, that's it, he had lousy vision, but didn't realize it because Roger Dorn never played a trick on him that led to Lou Brown discovering Sellers' myopia. Dammit. He could have been the next Wild Thing. Not Mitch Williams, we'll get to him later.
Posted by bloggerDK at 3:56 PM