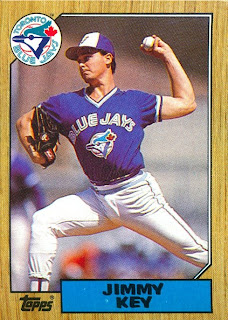 Not a bad shot at all on this card. It's a good action photo of the lefty's delivery, giving a nice look at the Jays' logo and Jimmy's Rawlings glove. His eyes are in a shadow, but you can still see the focused concentration on his face. Nice card.

Key's second near Cy win was in '94 when Key was in New York. He was just barely edged by David Cone who was lights out that year in KC. Cone would join Key in New York the next season.

Overall, it seems as if Key has been all but forgotten over the years, which is a shame, because he was one of the best, most consistent pitchers, in the '80s and '90s.
Posted by bloggerDK at 11:08 AM