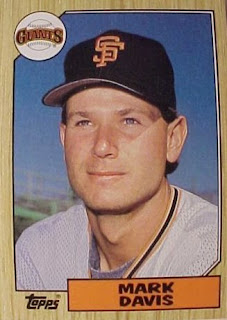 I was hoping Mark Davis' middle name was "Nondescript" but it is in fact "William" which manages to be more nondescript than the word "Nondescript." This is reflected perfectly in the most boring of card shots. In fact, it's so boring I'm not even going to break it down. Especially when there actually IS something interesting about his career.

Davis was a below average reliever who ended up with an ERA+ of 89. Not so good. But guess what? HE WON A CY YOUNG AWARD! In 1989, he saved 44 games for the Pads with a 1.85 ERA. And he threw 92+ innings, which is a lot for a closer. Great season. From time to time you will find flukey guys who won Cys mostly because they had a great season for a team who played in a World Series or at least won a division. But the Fathers didn't even win the division that year. And Davis was a reliever. And it's not like he had a history of dominance. And he won the Cy! And it wasn't even close! Davis had 19 first place votes. Second was Mike Scott with 4. Davis has to be one of the worst pitchers to take home the award.
Posted by bloggerDK at 7:09 AM