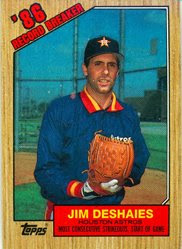 As you've probably picked up on, the set starts with all record breakers. Good, let's get these things out of the way and get to the real meat of the set.

Here we have the immortal, uh, I mean, forgettable Jim Deshaies. On Sept. 23, 1986, he struck out the first 8 hitters of the game. Of course the card doesn't say what team the Astros were playing, but checking B-R, I can see that it was LA. I was really hoping he pitched a lousy game after striking out all those guys, but I was wrong. He threw a 2-hit shutout and ended up with 10 Ks. Pretty damn good.
Posted by bloggerDK at 9:28 PM