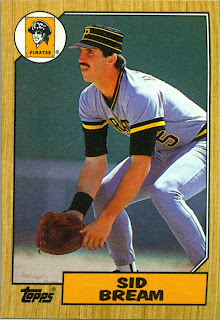 Ladies and gentlemen, your 1990 Hutch Award winner! Um, what? I had to look that one up. Apparently, the Hutch Award is given annually to "an active player who best exemplifies the fighting spirit and competitive desire to win." (from Wikipedia). The award was created in honor or Fred Hutchinson, a major league pitcher who died of cancer in 1965. Most of the recipients were players who overcame a tremendous amount of adversity (usually health-related) to be productive major league players. For example, Tony C won it in 1970, 3 years after being hit in the eye. Dave Dravecky won it in '89 after coming back from the removal of a cancerous tumor. And most recently, John Lester took it hom after kicking lymphoma's ass and becoming one of the top lefties in the AL.

So it's not an honor to take lightly. Which is good because if it wasn't for the famous play at the plate that won the Braves the NL pennant in 1992, Bream would be mostly forgotten.

Now the card itself. Ah those stupid Pirates hats. Couldn't be more annoying to a self-proclaimed stripe-hater. Seriously, what was up with those damn caps? Pittsburgh should have just gone all the way and had the players wear pirate hats like the one in the logo. But other than that and the fact that Bream looks like he's trying to take a crap on the first base bag, the card is decent. Bland photo but not terrible.
Posted by bloggerDK at 12:52 PM