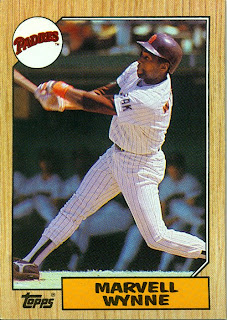 Decent action shot of Marvell Wynne as he rolls his wrists over. It looks to me as if he was a tad ahead of this pitch, but he did manage to stay back. If that makes sense. They guys in the dugout almost look like they're re-enacting that scene from Major League where the players are stomping their feet in unison.

Marvell didn't stick around the bigs for very long, mostly because he wasn't a very good baseball player. I don't know him well as a player, but judging by his stats he seems to fit the profile of a speedy defense-first center fielder. His limitations, which were many are summed up by his 1984 season:

Blech. It didn't help that he followed up that season with 337 ABs and an OPS+ of 43. Double blech. Oh well, at least he had a good sports name.
Posted by bloggerDK at 2:51 PM