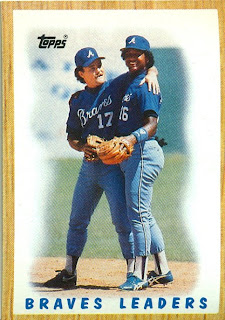 So here we have our second "leaders" card of the set, and it's the Braves. I put "leaders" in quote here because, as I mentioned, it's the '86 Braves, who didn't lead much of anything. On the front we have Glenn Hubbard putting his arm around Rafael Ramirez as both are clad in those awful powder blue pants the Braves wore in the '80s. I know it's the Braves, but come on, Topps. You're telling me you couldn't have chosen to better players than these two? Dale Murphy? Bob Horner? Ken Griffey? Gene Garber? Somehow Topps managed to choose the two LEAST productive Atlanta regulars for their "leaders" card. Hubbard (76 OPS+) and Ramirez (64 OPS+) didn't exactly rake that year.

Maybe this was the only photo with two Braves that looked like they were actually having fun. I have no idea.
Posted by bloggerDK at 6:45 AM