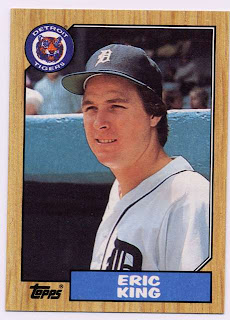 Well, not a whole lot to say about this card. The shot is about as bland as they come, except for the fact that the placement of the logo makes it look sorta like one of the fans in the background has a tiger head. But not really.

Eric King didn't have much of a career, but he was pretty effective for most of it. He put together consecutive seasons for the ChiSox with 25 starts and ERAs under 3.40. Not bad. But beginning in '91, King lost it and was out of the majors for good after '92.

Some Seattle fans might remember that Eric King gave up the first career homer of their once and future outfielder, Ken Griffey, Jr. Speaking of whom, I hope the kid stays healthy as I think he has one more semi-productive season in him. As long as no one throws him fastballs over 93 MPH.
Posted by bloggerDK at 2:42 PM