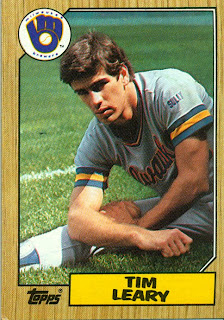 When Leary's on the mound, you turn on, tune in, ground out.

OK, that was a little forced, but it was the only joke I could think of for a marginal major league pitcher who shared a name with a famous proponent of LSD.

Anyway, I remember getting this card when I was a kid and thinking Leary looked a lot more like an actor playing a baseball player than an actual player. The combination of the athletic stretch pose, soap opera looks, strong brow...ok, I'm going to go confirm my heterosexuality...

...and we're back. So anyway, the one interesting thing about this shot is that we get a look at the memorial patch the Brew Crew wore during the '86 season in remembrance of longtime Milwaukee equipment manager Robert "Sully" Sullivan.

Predominantly a starter throughout his 13-year major league career, Leary was ineffective (78-105, ERA+ of 90) with one notable exception. In 1988, Leary went 17-11, 2.91 for the World Series champion Dodgers. Like just about any other LA starter, um, ever, Leary benefited greatly from the dimensions of Chavez Ravine (check out his splits), but even his away numbers that year blew his career averages out of the water. His season earned him the Comeback Player of the Year Award, which, in Leary's case doesn't really make sense because he had no history of success to "come back" to.
Posted by bloggerDK at 5:05 PM