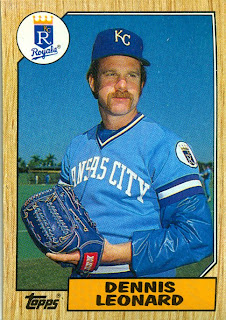 Could there possibly be more blue in this photo?

It's interesting that Topps gave Leonard a card, being that he retired after the 1986 season. I assume he retired toward the beginning of the 1987 calendar year. Regardless, Leonard was off to a nice start before he hurt his knee, which really wrecked his career. From 1976-1980, he won 92 games and threw a ton of innings. He was never a truly dominant pitcher, but before he got hurt, he was very reliable, pitching 20+ complete games in consecutive seasons, 9 of which were shutouts.
Posted by bloggerDK at 3:27 PM