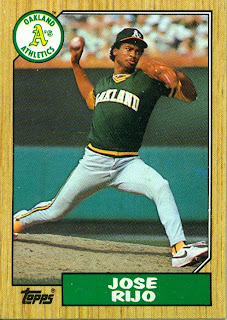 Stripes aside, I like this card. It shows a hard throwing right-hander who wasn't yet a star at full physical exertion. Both his glove hand and pitching hand are a little too blurry, but there are some cool things going on. Rijo looks furious as he 's about to let loose, and his right foot looks like it's stepping onto the diagonal border of the card. Cool stuff.

Jose Rijo had an interesting career. He came up to the bigs at 19 years old for the Yankees, seemingly to steal some attention from the Mets' own phenom, Doc Gooden. Looking back, that was far too soon. Rijo struggled for the Yankees and was shipped to Oakland in a trade that brought the Bombers Rickey Henderson. Rijo spent three mostly tough seasons in Oakland as a part-time starter, until he was involved in another big-name trade that sent him to Cincinnati and brought Dave Parker to Oakland. Parker would help the A's win the World Series in '89 but Rijo would later come back to absolutely PUNISH his former club. More on that in a minute.

Keep in mind, at this point Rijo was still only 23, an age when it starts to become clear what kind of ballplayer most guys will become. He got his first start for the Reds June 8th of 1988, tossing 6 innings of 2-hit ball in a 7-1 win. Rijo started the rest of the year and finished at 13-8, 2.39, cementing his place in the Cincy rotation.

In 1990, Rijo took the Reds to the Series against Oakland and absolutely mowed down his former team to the tune of two wins, 15 innings, one earned run, 14 Ks and a 0.59 ERA. Ladies and gentlemen, that's dominance.

Injuries ended a remarkable 8-year stretch when Rijo was just 30, but he would make a comeback a whopping 6 years later. In his first game back after the long layoff, he pitched two innings, giving up no runs and striking out two. What a gamer. He pitched well in a reliever role that year before hanging it up for good a year later.

I know that is about the longest I've written about anyone in this set so far, and I'm sure some of it has to do with a documentary I just saw on the 1990 season, but I've always been a fan of this guy.
Posted by bloggerDK at 6:30 AM