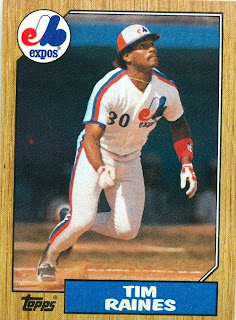 Remember when "Rock" started appearing as Raines' first name on cards in the early 90s? I never understood that. Did he insist that he be referred to that way in official communications? If he did, I can't say I blame them because I doubt I'd have the stones to disagree with this guy.

This is a nice shot of a great player. We get the full body photo as Raines drives a ball to what looks like right field. You can even see the bat he just dropped and the lines of the batter's box. My only quibble is that I'd rather Topps picked a shot where Raines was either running the bases (they almost never used photos like that back then) or taking off after a line drive.

Raines was one helluva baseball player and it bothers me that most people don't seriously consider him for the HOF. I'm not saying he should be a lock by any stretch, but just that there should be more debate about his qualifications. This is a guy who stole 70+ bases 6 consecutive seasons, something Rickey never did. He also hit .300+ for four straight seasons over that same stretch, another thing Henderson never accomplished. Keep in mind I'm not saying he was a better player than Rickey, but they're closer than people seem to accept. Take a look at their career numbers:

Sure, Raines isn't close in SB, but no one is, and Rock IS 5th all time. And despite all those walks Rickey racked up and his superior homer totals, Raines still has an OPS+ right in the same range.
Posted by bloggerDK at 5:01 AM