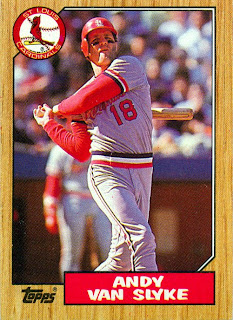 Interesting photo of Van Slyke. The photographer caught him on the backswing after what looks like a foul ball. It COULD have been a swing-and-a-miss judging by the look on Andy's face, but I'm going to stick with a foul ball. The shot makes him look like a real gamer, eye black and all, but it's also Stripe City, and we all know how I feel about stripes at this point. As for the guy on dick, (yes you read correctly, look at the guy), I'm not sure who it is, but Van Slyke batted 8th most of the season, so it could be that game's starter. However, the guy's right arm has a few too many to be a pitcher. So I'm guessing it was a game when Andy didn't hit 8th. If anyone has an idea, let me know.

Van Slyke had a pretty short career (he was done by 34) but he was a great player. He didn't come into his own until he was traded to the Pirates with Mike Dunne and Mike LaValliere for Tony Pena, but in 1990 he was one third of a fantastic Pittsburgh outfield of Barry Bonds in left, Andy in center and Bobby Bonilla in right. As we all know (and I'll talk more about when we get to Jose Rijo), that team lost to the eventual Word Series champion Reds in the NLCS. Van Slyke would go on to win 5 gold gloves (nothing to scoff at for a centerfielder) and was 4th in MVP voting twice. Great player.
Posted by bloggerDK at 6:32 PM