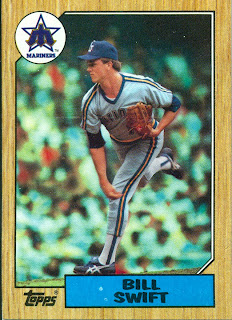 Swift was a decent pitcher, who began his career as a starter without much success, then transitioned to the pen and was fantastic. In '92 he was traded to San Francisco and became a starter again. That ended up being a great decision as Swift led the league in ERA in '92 and finished second in the Cy Young Award voting in '93 (21-8, 2.82).
Posted by bloggerDK at 12:42 PM