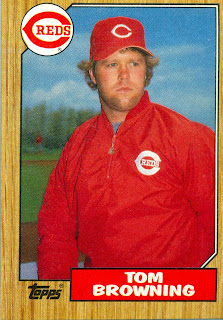 "Hi, Mrs. Johanssen, I'm here to clean the pool." Browning looks like quite the athlete in this photo, doesn't he? Ignoring his pudginess, it's actually a decent photo. Lots of red and white and even a guy way in the background with a red jacket on. Plus, we have three different Reds logos visible. The Topps one in the upper left, the cap logo and the jacket version. Nice.

Browning was an average starter who had a couple great years, victory-wise, and is definitely best known for throwing a perfect game in 1988. There are a bunch of cool things about that game. First, Browning threw it against the Dodgers, who of course ended up winning the World Series. Second, the LA starter for that game was Tim Belcher, who pitched almost as well. He went the distance, giving up only 1 run on 3 hits, with 1 walk and 7 Ks. I figured that must have been a quick game...and I was right. 1:51. 1:51! That's unbelievable. Can you imagine if a network game happened that quickly? Fox would crap themselves.
Posted by bloggerDK at 11:53 AM