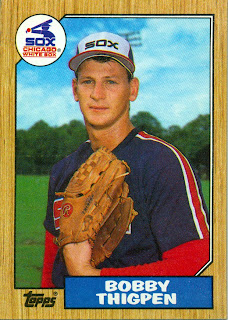 Aside from Thigpen looking like a giant dork in this photo, it's not a terrible card. We have the cap-logo-next-to-the-card-logo thing, which I love, a nice clear shot of a somewhat broken-in Rawlings glove, and a background that looks almost fake. I seem to remember seeing it on other Chi-Sox cards in this set.

Thigpen is best known for his ridiculous 1990 season, when he notched 57 saves with a 1.83 ERA for a White Sox team that won 94 games. Unfortunately they played in the same division as the As back then, so they didn't have much shot at the pre-wild card era postseason. Due mostly to back injuries, Thigpen was done by the time he was 30.
Posted by bloggerDK at 6:37 AM