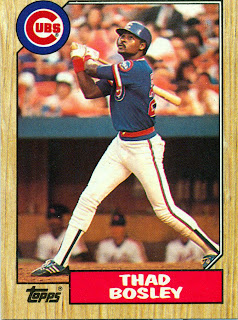 Now we're talking. This a much more interesting card than the Scott Nielsen one. There's tons of red, blue and white in the photo with Bosley's '80's Cubs uni, the matching logo in the upper left corner, the red nameplate...it's all great. Bosley is also standing almost straight up after his swing, which is pretty rare. Plus, you have a few Mets in the dugout watching the action. Anyone know who those guys guys are?

I'm not too keen that Bosley's left foot is cut off, or that it's clear he popped out, but hey, you can't have everything.

Bosley wasn't a great hitter, and was exclusively a part-timer during his career. He had almost zero pop, something that doesn't happen much anymore for an outfielder, so let's move on. The fact at the bottom of the card reads, "Thad has recorded a gospel contemporary album 'Pick Up The Pieces.' He enjoys writing poetry." Why do I bring this up? Well, I searched the iTunes store for "Thad Bosley" and found one track. I listened, and, well, let's just say Thad was just as good a hitter as he was a lyricist. In the 30-second clip (I refuse to pay for the whole song), you can hear:

Where are the answers?
Who really knows?
It can't be religion
Because no one agrees
And it's not in the movies
Or late night TV

Deep stuff, Thad.
Posted by bloggerDK at 5:54 AM