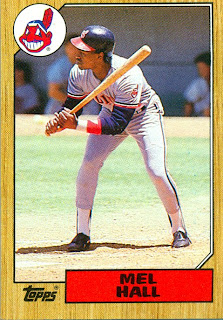 Not much to say about this card. Boring, and slightly peculiar shot, nothing interesting going on in the background. Even Mel's name is boring. That said, Hall is one of those *somewhat* obscure players I'll never forget, mostly because he is inextricably tied to a period of Yankee futility. (He played for the Bombers from '89-'92, a time when they never finished better than 4th in the AL East.) He's a perfect example of what was wrong with those Yankee teams. He was paid like a star but the only place he produced like one was in his own head.

Plus, he was a colossal idiot. I've heard/read a bunch of stories similar to those chronicling his torture of Bernie Williams, who, by most accounts is a pretty decent guy. And let's not even mention the allegations of sexual assault.

I'm not trying to associate his assholedness solely with the Yankees, he did play for the Cubs and Indians (and the Giants for bit after he came back from Japan), but I remember him mostly as a Yankee.
Posted by bloggerDK at 1:01 PM