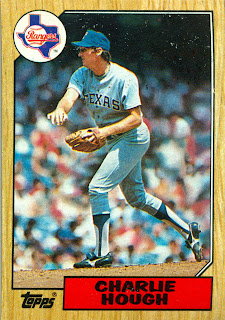 Hough was an interesting story. He didn't become a full time starter until he was 34. AND THEN STARTED 400 MORE GAMES. That's pretty amazing. And it's not as if he wasn't an effective pitcher to that point. He had several good seasons out of the pen for LA but didn't get a chance to start regularly until he was sold (yes, sold) to Texas. From there he churned out start after start, even starting 40 games 1987. He was remarkably consistent, winning between 10 and 18 games every year from '82-'90, never having an ERA+ better than 128 or worse than 91. He finished his career with the expansion Marlins, even acting as Florida's opening day starter in '93 and '94 (at 46 years old).
Posted by bloggerDK at 1:10 PM