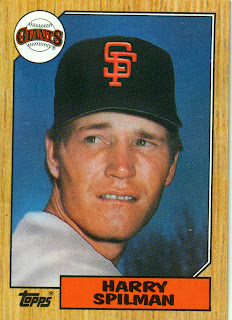 Welcome to the time before Photoshop. What a terrible airbrushing job this is. It looks like Spilman is poking his head out of a cumulus cloud. Aside from that, this card goes into the "Guys Who Look Like They're Pitchers But Aren't" category. I honestly did think Harry was a moundsman until I looked at the back. Is "moundsman" an actual term? If it's not, consider it coined.

It's hard to find something compelling to mention about Spilman. The guy was a career utility guy, never played more than 83 games, never compiled more than 159 plate appearances. He did play in three career postseason series for three different teams, losing them all. In those series, he totaled 5 ABs and 1 hit, which was a homer off Todd Worrell. That homer came in the 9th inning of game 3 of the '87 NLCS and brought the Giants within one run of the Cards. Kevin Mitchell flied out to end the game. Yeah, so that's...something.
Posted by bloggerDK at 11:09 AM