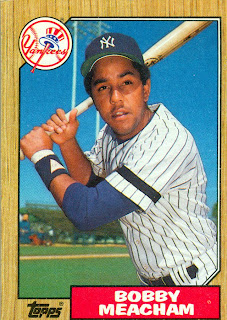 Hey, it's Bernie Williams without his glasses! Oh wait, it's Bobby Meacham. Nothing too notable about this photo, other than the armband Meacham is wearing on his left sleeve. I had to look it up, but Yankees players wore that band in 1986 in memory of Roger Maris, who passed away in December, 1985. By the way, check this out. It's a great resource for information regarding patches and armbands in baseball history.

Meacham had a short career and didn't play much during that time. He was a lousy hitter and not good enough defensively to make up for it, so NY was constantly trying to find guys to replace him. Talking to a Yankee fan, he commented, "I used to think Meacham was the definition of a good shortstop in my jaded, terrible Yankee teams of the late '80s kind of way." I think that sums it up.
Posted by bloggerDK at 6:55 AM