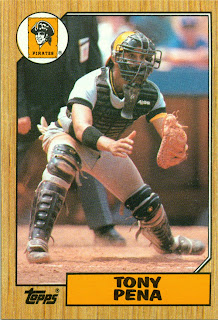 Great card. Nice action shot of one of the best defensive catchers of his time taking a throw to the plate. You even see his eyes concentrating on receiving the throw, the Rawlings logo on his mask and "All-Star" on his chest protector.

A below average offensive player with occasional pop, Pena more than made up for it with his play behind the dish. He won 4 gold gloves (3 in Pittsburgh, 1 in Boston) and handled a staff as well as anyone. When he came to Boston, he was one of my favorite players from the first time he lowered himself into that one-legged crouch. Hopefully the guy gets a chance to manage again someday. He did an amazing job with the '03 Royals, guiding them to 83 wins, despite the fact that they had a staff of immortals like Darrell May, Chris George and Runelvys Hernandez.
Posted by bloggerDK at 6:24 AM