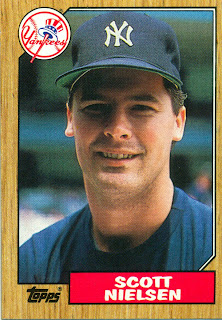 '87 Topps is back! For good this time. And what better way to revive the dormant blog with...a really boring card. It's too bad the shadows didn't completely overwhelm Nielsen's face (instead of just mostly), because then we might have been spared the sight of his terrible teeth. But aside from that, I like the cap logo right next to that other "Yankees" logo Topps decided to use. I always hated that stupid top hat in that illustration.

Scott had an unremarkable career. He pitched parts of 4 seasons, sometimes as a starter, never very successfully. He did give up a large % of his homers to Red Sox and former Red Sox, which makes sense considering he played the bulk of his short career for the Yanks. Of the 26 homers he gave up, here are the one-time Sox: