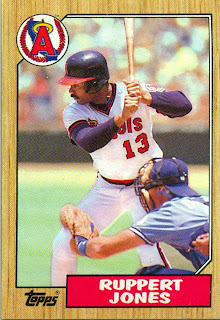 Bland photo. Except for the fact that the catcher looks like he was cut out and pasted on, there's nothing much to say.

Ruppert Jones is our second guy in the last few cards who played in Japan. (Mel Hall did, too.) Jones was a decent player and even made two all-star teams. He had some power (24 homers in '77), some speed (33 SB in '79) and was a full-time center fielder for a few years. He was pretty inconsistent from year to year, at least in terms of batting average, which is probably why he couldn't stick with a team for long (6 teams in 12 seasons).
Posted by bloggerDK at 3:31 PM