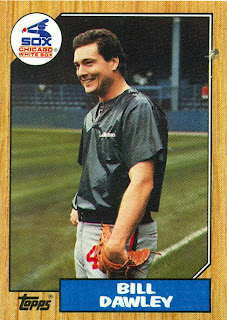 Kinda dorky posed shot here. But we do get a little peak at those goofy Chisox pants numbers they had in the '80s and those equally goofy warmup shirts that look like they were made from the tarp they roll out during rain delays. Do you think Bill's nickname was "Dilly"? I hope so.

As I've mentioned before, many relievers have great starts to their careers before batters figure them out. Dawley was no exception. He was fantastic his first two seasons, compiling a 120 ERA+ and 0.916 WHIP in nearly 80 innnings as a rookie, and followed that up with a whopping 171 ERA + and 1.194 WHIP in 98 innings his second year. Things went downhill from there and he was out of the league before he was 32.