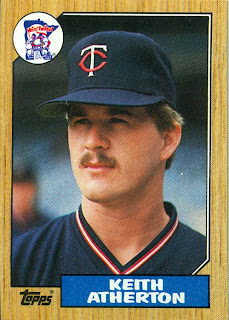 Quick, hold your tongue and say, "Keith Atherton." Sounds like "Keiss Asserton" doesn't it? Keith must have known that joke. With a 'stache like that, you gotta have a good sense of humor, right? Plus, what is going on with that cap? He's wearing that thing like a stovepipe hat. Maybe that's John Wilkes Booth in the background about to jump up and yell, "Thic themper tyrannis!"
Atherton was quite a middling middle reliever throughout his 7-season career. He had a great rookie season (as many relievers do) but then hitters figured him out and he settled into years of mediocrity, finishing with a 101 ERA+. He did contribute to the '87 World Series season for the Twins, but was pretty much a nonfactor in the postseason. He pitched the 9th in a 10-1 blowout victory in game one and then gave up 1 run in only a third of an inning in a 4-2 loss in game, getting called for a balk in the process.
Posted by bloggerDK at 5:59 AM