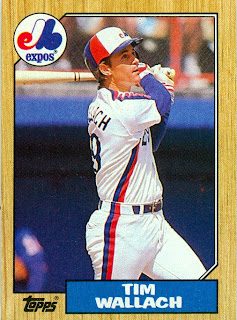 Hey, stripes that don't bother me! I like the red and blue up the side. They have a way of emphasizing motion as they turn and twist the player's movement. Plus, the stripes coordinate with pretty much everything else on the card. Wallach looks like he went to right with this swing.

Wallach is the first good player we've seen in awhile in this set. He was an OK offensive player, made 5 all star teams, won 3 gold gloves as a 3B, received MVP votes 3 times...that's an excellent career. He didn't walk enough, struck out too much and didn't hit for a very high average, but he was an important part of a bunch of decent Expos teams.
Posted by bloggerDK at 6:06 AM